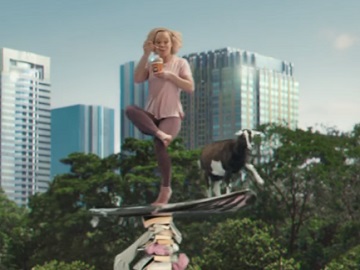 Halo Top Creamery advertises its ice cream in a series of new commercials, part of the “Put Yourself First” campaign.

One of them, created by Wolfgang and The Mill and directed by Ulf Johansson, features a young woman who eats a Halo Top ice cream. As the camera pans, it turns out she has been trying to juggle her priorities (like working, reading, knitting, exercising, using the bike for her commute, and more) and eventually realized she needs to put herself first. The protagonist is shown doing some yoga moves on a surfboard, next to a goat. Under the surfboard there is a huge pile of books that are on a bike. Next to her is a goat doing some yoga moves, too.

“Well, well, look at you, seizing the day by the horn. Taking care of yourself, eating delicious Halo Top light ice cream, stretching the stress away with goat yogurt, catching some calming waves, knitting good vibes, reading less emails and more romances novels, trading the traffic for a fresh air commute, you make self-love look easy,” the voiceover tells her.

The commercial ends with the tagline “Put Yourself On Top” flashing across the screen.

The brand’s “Put Yourself First” campaign, which aims to bring “a sense of humor to the tireless effort people put into making themselves better” and reminds consumers that the best self-care is whatever brings you happiness, also includes another ad, featuring a man on a treadmill.

The campaign is set to run across TV, social and OOH throughout 2022.