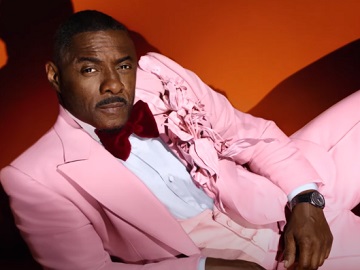 GUCCI has unveiled Idris Elba as the star of its latest campaign for the GUCCI 25H timepiece collection, envisioned by Creative Director Alessandro Michele.

The campaign film features the British actor, producer, and musician performing an inner monologue throughout a single-take sequence that blends hints of retro aesthetics and humor. “I’ve never had enough time. And I probably never will. Like a kid in a candy store.

With time. I spend it all. And I come back for more. And more and more. It’s my greatest joy,” Elba says in the 30-second commercial, adding the tagline “It’s GUCCI time”.

The director’s voice is then heard saying “Cut” and the actor asks if they got it. When he hears a “No” as an answer, he bursts into laughter and the line “GUCCI timepieces” appears on the screen.

The campaign marks a partnership with Mert Alas & Marcus Pigott, who photographed Elba and directed the film, and Ezra Petronio, who served as Art Director.