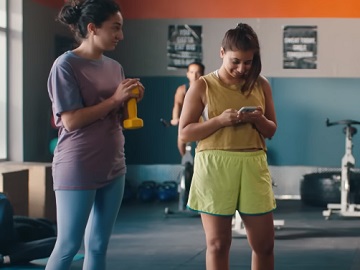 Grubhub continues its campaign with a new installment.

The spot features three friends at the gym, talking about the date one of them she’s going to have. When the young woman declares that her boyfriend’s idea of a date is pizza night, one of her fellows says she thinks he’s not craving pizza, but pizza night with her. The other woman agrees, concluding that pizza night is more than just pizza, it’s their Friday thing.

“Go for Pizza Night, go for Grubhub,” the voiceover says at the end of the commercial.

In another recent ad, Grubhub promoted its newest deal, valid for Amazon Prime members, which gives them one year of free Grubhub. The spot featured the parents of a newborn baby who order their favorite food through Grubhub when their child is asleep, every day, because they are Amazon Prime members and have $0 delivery fee.