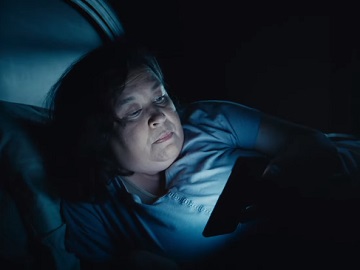 Grayscale has launched a new commercial to promote its website.

The spot, created in partnership with agency of record Vested, production company Honor Society and director Brennan Stasiewicz, features a middle-aged woman waking up in the middle of the night and calling her son, who’s a grown up man, living in his own apartment, to let him know that inflation is rising and and they need to diversify. When the young man says “Mom” confused, without understanding the connection between what she’s saying and the reason she called him late at night, the mother explains that she’s having more exposure to crypto and, asked what time it is, she points out that “it’s crypto time”. Exhausted and willing to get back to sleep, the son concludes, after turning off the phone, that he created a monster (referring to the fact that he was the one who talked to his mother about crypto and made her become interested in this).

The commercial ends with the voiceover saying the Grayscale tagline – “Building the future of financial legacies”.

The spot is part of a campaign that includes other eight humorous spots that tackle the stereotype of older investors being “out of touch” or “behind the times” when it comes to managing technological advancements or crypto investing. Serving as inspiration for the ads was a recent survey from Grayscale, revealing that a broader, more diverse cross-section of Americans, including those aged 55 and 64, are more likely to consider investing in Bitcoin and cryptocurrencies than ever before.