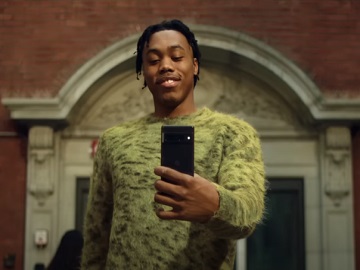 Google has launched a new ad campaign to celebrate the World Cup 2022 and has enlisted Meghan Rapinoe, Carlos Valderrama and Scottie Barnes to star in some of the spots.

One of them shows what came out when Barnes took to the streets of Toronto with the new Pixel 7 Pro. “Day 1, I didn’t know what to expect. But then you showed me what’s good,” he says in the opening of the 45-second commercial, adding “No one has pride like you, no one has passion like you. And you know that’s worth capturing, right? And sharing the love because the more you can make, the better you connect. And now this isn’t just another city, this is my home.”

The commercial ends with the voiceover saying the tagline “Pixel 7. Even better with Bell.”

Announced earlier this year, in May, at the tech giant’s I/O 2022 event, the Pixel 7 series is available in-store and online at the Google Store.

The Pixel 7 series is a sponsor of the official ITV coverage of the World Cup in the UK, with tailored ads airing before matches.