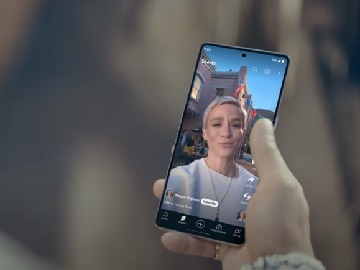 Google shines a light on some of the innovative features of its Pixel 7 and Pixel 7 Pro in a new, inclusive, World Cup-themed commercial, which aims to point out to the organizers of the major sport event (surrounded by controversies due to the culture and the restrictions imposed) that “The Beautiful Game Belongs To All of Us”.

The spot showcases the Macro Focus, Super Rep Zoom, Live Translate, Magic Eraser, and Face Unblur features of its new flagship smartphones, and includes appearances from US Women’s National Team star and LGBTQIA+ advocate Meghan Rapinoe and former Colombian national team captain Carlos Valderrama. The latter shows up in a coffee shop where a fan recognizes him and uses Live Translate to tell him that they will see each other again in 2026.

The commercial encourages you to “just make sure you’re seen”, a subtle dig at FIFA’s decision to give yellow cards to players for wearing “OneLove” armbands during matches.

The Pixel 7 and its Pro variant were announced earlier this year, on May 11, during the I/O 2022 event and are now available for purchase in stores and online at the Google Store.