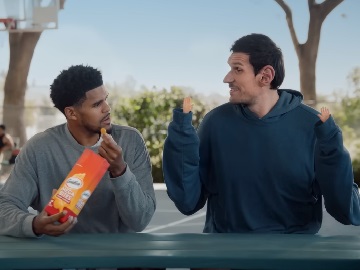 The spot opens with Harris telling his fellow that Goldfish Mega Bites are too big in flavor to eat a whole handful at once. Marjanovic shows him how he can still “go for the handful” by eating the Mega Bites with some small toy hands, that let him hold only a single Mega Bite at a time. When Harris points out that he is still eating the same number of Goldfish, either way, Marjanovic shushes him using one of the tiny fingers.

The Goldfish Mega Bites, made with no artificial flavors or preservatives, are always baked, never fried, according to the brand. The crackers are available in Sharp Cheddar cheese flavor and can also be bought on Amazon.

This is not the first time Harris and Marjanovic share the screen in a commercial for Goldfish. Last year, they appeared in the brand’s “Go For The Handful” campaign, created by Saatchi & Saatchi New York. In one of the ads, Harris assists his good friend in counting a handful of cheddar-flavored Goldfish baked snack crackers.

Goldfish has also enlisted the Savage Brothers to promote its Goldfish Mega Bites. The two siblings, Fred and Ben, known for their work in the ’90s as child actors, touted the crackers in a spot that raises the question “What Will They Reboot Next?”.