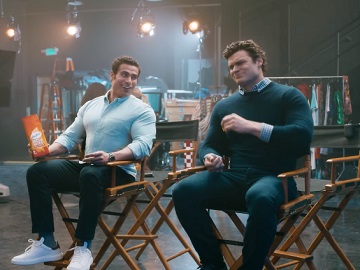 Goldfish has enlisted the Savage Brothers to promote its Goldfish Mega Bites.

The two siblings, Fred and Ben, known for their work in the ’90s as child actors, co-star in a commercial titled “What Will They Reboot Next?”, in which they are raising exactly this question.

The brothers, who are sitting next to each other in folding chairs on a movie set, talk about reboots. Fred says that the Goldfish Mega Bites (which he holds in one hand) are “technically a reboot” of a “childhood icon”, which makes Ben point out “We’re childhood icons. Will they reboot us?”.

The end of the commercial sees the two being replaced with muscular lookalikes and introduces the new version of the iconic fish-shaped crackers as “Bigger, Bolder, Cheesier”.

The Goldfish Mega Bites, made with no artificial flavors or preservatives, are always baked, never fried. The crackers are available for purchase on Amazon. Flavors include Sharp Cheddar cheese flavor.