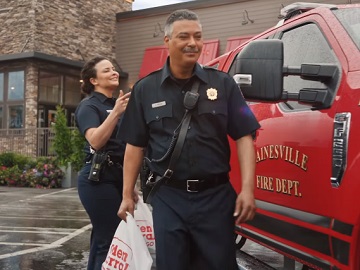 Golden Corral highlights, in one of its latest ads, that you can get the Golden Corral Buffet To Go with Weigh & Pay, a service that allows you to grab a to-go box, fill it up with your favorites, and pay by the pound.

The spot features two police officers in a Golden Corral branch who are having a conversation while filling up their to-go boxes. The rookie asks the chief what weighs more between two different types of foods, listing various options, such as meatloaf and steak, ham and turkey, mac&cheese and cookies. After confidently answering all of her questions, the chief suggests they go at the Weigh & Pay Buffet and find out.

On their way out, the woman comes up with another question, which she thinks might put her fellow in difficulty, and asks him to say which one a carrot cake and a pound of ice cream is heavier, but the chief says only “Nice try, rookie!”

The tagline appearing on the screen at the end of the commercial highlights that Golden Corral, a place where you can dine in, pick up and have delivery from, is “The only one for everyone”.