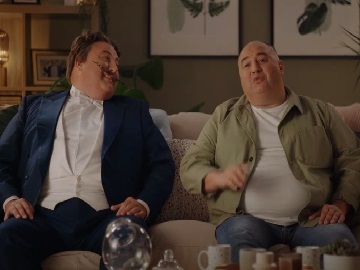 Go.Compare has released a new ad to highlight how it has been helping the nation save with its £250 free-access cover on car insurance and that consumers can now get the same free access cover when they buy home insurance through the comparison site.

The spot features Go.Compare’s operatic tenor Gio Compario and the Welsh actor who plays him, Wynne Evans, sitting on a sofa and talking to the camera. Well, Evans does the talking while his fellow musician tries to grab the last chocolate cookie from a jar. “We’ve had a lot of memorable moments helping the nation save money. In fact, our £250 free-access cover on car insurance alone means we’ve given back over £4 million to our customers since 2019,” Evans says, adding that they are not stopping here. He also adds that “you can now get the same free access cover when you buy home insurance through Go.Compare”. “We just love giving back, don’t we, Gio?” he then asks Compario, who set his eyes on the last chocolate cookie from a jar. Hearing his question, the latter gives up the sweet treat, with a disappointed look on his face.

Earlier this year, the comparison site launched a new logo and consumers can now switch and save at new website address: Go.Compare.

The new logo went live on TV and the website on September 2nd and was launched via the company’s sponsorship of the new series of “The Voice UK” on September 3rd. As part of the sponsorship, Gio Compario and Wynne Evans are both in the judging chairs, trying to find a new voice to help them sing the new brand jingle and play the “dot” in the new website URL.

Compario, who became GoCompare’s mascot in 2009 and has appeared, since then, in numerous ads, has become one of the longest-running characters in British advertising. In 2015, after an 18-month break, he returned in a new major national ad campaign, even though the same year he had been ranked “the most annoying UK ad mascot ever.”

“Gio has been around since 2009 and has starred in over 125 ads. While it’s no secret that he’s annoying to some, you can’t deny his longevity and fame. He’s evolved with the business and we continue to tell his story, which grows alongside the Go.Compare comparison business. I love that he is continuing to evolve as our brand mascot, as we continue to develop the brand itself with the new Go.Compare logo and website,” Paul Rogers, Director of Brand and Campaigns at Go.Compare, said in a press release.