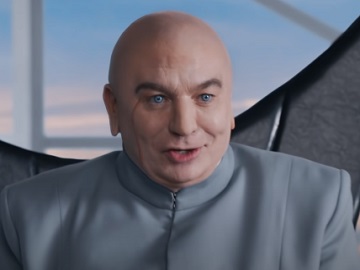 The spot features Mike Meyers reprising his “Austin Powers” character and finding himself in an unusual predicament after taking over GM. He is informed, during a conference at the General Motors headquarters, that his henchmen, Number Two, Frau Farbissina and Scott Evil (played by original actors Rob Lowe, Mindy Sterling and Seth Green) that climate change is now the biggest threat to the planet and that, if he wants to get back on top, he will have to save it with GM’s lineup of electric vehicles.

His son, Scott, also informs him that he has a grandson, whom Dr Evil wants to name “Baby Me” (after himself). The evil character decides to help save the world first and then take over the world. Frau Farbissina tells him that they will reduce their carbon footprint and Dr Evil shouts that they are going all-electric.

A final onscreen line informs that there will be “30 EVs globally by 2025” from GM.