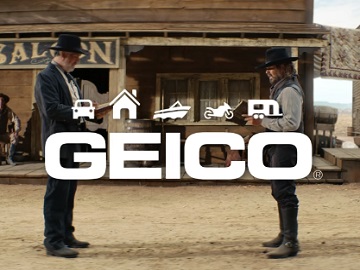 GEICO continues its “More Ways to Save” campaign with a new installment, urging consumers to switch to GEICO and save on car, homeowners, motorcycle and more.

The spot features an outlaw played by Blake Gibbons and a lawman played by Patrick Wilkins scheduling a stand off. The initial plan is to meet center of town, high noon, but it turns out they agendas are quite full. One of them needs to take his daughter to a lassoing lesson at one and go to a spur fitting at two o’clock. The other is not available, though, for three o’clock because he already has something scheduled for that timeframe: he’s getting thrown through a saloon window.

The commercial ends with the voiceover saying that “We don’t need any more overscheduling, but we could all use more ways to save.” Viewers also get to see the lawman telling his opponent that he can squeeze him in between swim class and Kevin’s harp recital at 3.30.

Another recent commercial in the company’s “More Ways to Save” campaign takes a jab at the online verification tests designed to make sure you are not a robot and features a robot in a coffee shop that needs to pass one of those tests. After trying to identify an “overpass” and decipher a captcha text, he gets frustrated and damages the laptop. Later on, annoyed by the fact that his name was mispelled on his cup of coffee, the robot is lasering the cup.