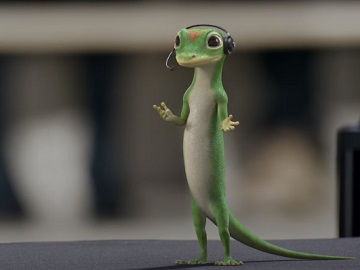 GEICO has unveiled a new commercial featuring its longtime mascot the Gecko.

The spot features a host commenting on a basketball game and exclaiming, at some point, “Wow, what a Cinderella story we have here!” The Gecko, who serves as a co-host, is asking who doesn’t love a Cinderella story. He then starts listing various things from the classic tale, pointing out how the story keeps you on the edge of your seat, such as the question if the glass slipper is going to fit, the evil stepsisters who almost chase the prince off, and the carriage, that turns back into a pumpkin at midnight. “Have you ever tried to drive a pumpkin?” the Gecko asks, mentioning that it’s “very unwieldy.” When the co-host asks him what he is talking about, the Gecko seems surprised by the question.

The commercial, which celebrates the company’s status as Official Partne of NCAA March Madness, ends with the voiceover urging viewers to go to geico.com and see how much they could save.