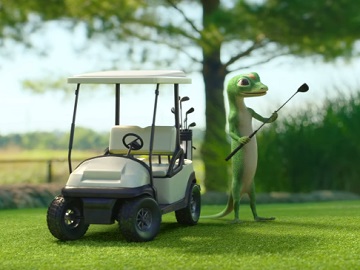 The Gecko plays golf in the latest GEICO ad and introduces a new concept in golf: gecko, which is when you score a hole-in-one on a par 3 and save a bunch on your car insurance too.

The spot features the company’s longtime mascot saying that, lucky for him, there is some great golf in the Carolinas and that, whether you golf or not, GEICO could help you score some great savings on car insurance. Maybe even hundreds of dollars. He then scores a hole-in-one on a par five, he explains, after an incredible hit.

The commercial ends with the voiceover saying the tagline “Switch today and see all the ways you can save”.

Recently, the Gecko told a Cinderella Story in a March Madness-themed commercial. In another recent commercial, the Gecko tells a rider that he deserves to save and in another one he becomes an Eternal, terrifying the people he talks to. Shocked by “the talking lizard,” those around him start running away, even though he talks about the insurance coverages the company offers, such as car, home, motorcycle and RV.