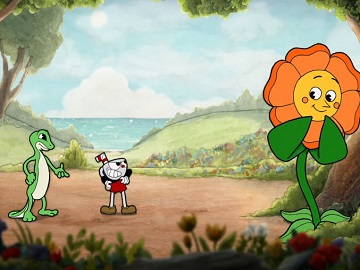 The Gecko meets Cuphead in the latest GEICO ad, which promotes the upcoming game “Cuphead: The Delicious Last Course”.

The spot features the company’s longtime mascot and his new fellow walking through a forest and meeting a flower-shaped boss that doesn’t seem scary at all, according to the Gecko. However, it soon turns out the boss they encountered is not as cute as it seems and concludes his bosses are way nicer. He also gets to tell people how easy it is to switch and save with GEICO.

The commercial ends with the voiceover saying the tagline “GEICO. Switch and see all the ways you could save”.

Cuphead: The Delicious Last Course is an upcoming DLC (preceded by Cuphead), which sees legendary Chalice returning as a new playable character going by “Ms. Chalice”. There will also be new bosses, levels, and a new friendly character called Chef Saltbaker.

Cuphead: The Delicious Last Course will be released on June 30th, 2022.

GEICO has been promoting several other movies and games over the years. Among them was The Eternals movie. The ad featured the Gecko becoming an Eternal and terrifying those around him, who were shocked to see a “talking lizard”.