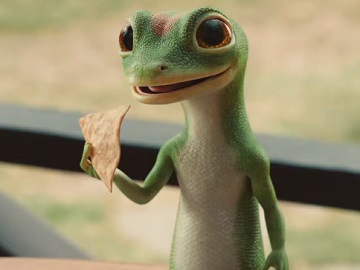 GEICO has dropped a new ad featuring its longtime mascot Gecko to highlights that GEICO makes saving on home and auto insurance easier than finding the perfect metaphor.

The commercial features the gecko talking to a couple around the table about how GEICO lets people easily bundle home and car insurance and save even more. The Gecko confirms that this is true, mentioning home, car and motorcycle, all bundled together, just like a breakfast burrito. “So, can I get chorizo?” asks the man, played by Jace Armstrong. “Uh, yeah, metaphorically, yeah,” the Gecko replies. His two friends then start listing or asking for different menu items, such as carnitas, chicken, and bacon. At some point, the guy wants to know if there isn’t too much hot sauce because he has a sensitive palate. The woman mentions that she actually likes hot sauce and asks if she can get chips, which makes the Gecko admit he doesn’t really know what they are talking about anymore.

The two friends give him two different answers simultaneously. While the man says “Burritos,” the woman says “Insurance”.

The commercial ends with the voiceover urging viewers to go to geico.com for bundling made easy.

In another recent commercial, the Gecko tells a rider that he deserves to save and in another one he becomes an Eternal, terrifying the people he talks to. Shocked by “the talking lizard,” those around him start running away, even though he talks about the insurance coverages the company offers, such as car, home, motorcycle and RV.