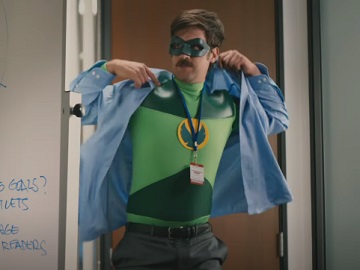 GEICO has released a new commercial to promote its bundling options.

The spot features a man named Craig who has a secret identity but fails to keep it secret. Hearing the news that a giant robot has landed downtown, he rushes out of the office, revealing a special green suit, belonging to a superhero, under his shirt. Realizing that he has entered a meeting room where his colleagues have a meeting ongoing, he tells them that the suit he’s wearing is just his workout equipment. When one of the coworkers says they all know he is the Green Hawk, Craig laughs and tries to deny it by exclaiming “That’s bananas!”. However, when another colleague points out that he’s still wearing his mask, he is left speechless.

“If you have a secret identity, you need to keep it secret. And if you want to save by bundling home and car insurance, you need GEICO”, the voiceover says at the end of the commercial, which also sees Craig stating that he is not the Green Hawk. Unfortunately for him, precisely that moment a delivery guy shows up looking for the Green Hawk and recognizes him. Craig grabs the meal and tells the worker that he’ll bring it to the Green Hawk, in his last attempt to keep his secret identity private.