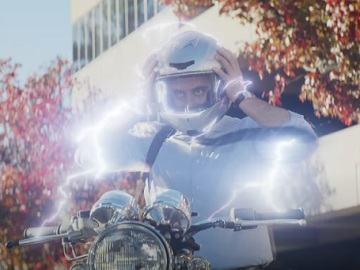 GEICO says it provides “savings and service for both your sides” in one of its latest ads, which promotes its motorcycle coverages and introduces Zen Zach.

The spot features Zach (played by Chris Kleckner) as a man whose life-work balance is anything but balanced. However, when he gets on the bike, he becomes Zen Zach. This new version of Zach exists outside of time, according to the voiceover, who also reveals that “his heartbeat sounds like a mellow drum circle” and “the only notification he hears is the sound of the ocean”. Those who want to reach him are advised to talk to the ocean in this case.

The ad also informs that Zen Zach rides with GEICO because saving money and getting great coverage is totally chill, and concludes with the voiceover saying the tagline “GEICO. Savings and service for both your sides”.

GEICO says it offers “cheap insurance rates and great coverage” regardless of the two-wheel vehicle you have, be it a sport bike, moped, cruiser, touring bike, standard, or antique.