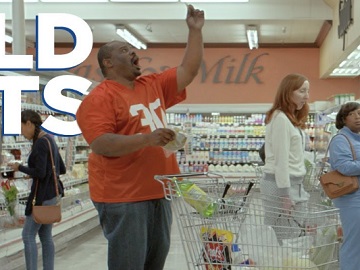 GEICO has released a new commercial to highlight that 15 minutes could save you 15% or more on car insurance.

The spot opens with a dentist (played by Paul Schackman) who learns from a GEICO ad that 15 minutes could save you 15% or more on car insurance, while working in a patient’s mouth. When the patient (played by Corey Parker) says that everybody knows that, the dentist asks him if he knows that former pro football star Ickey Woods will celebrate almost anything.

At this point, Woods is shown in a grocery store celebrating that his turn finally came and he is now able to order some cold cuts. He busts some dance moves in front of the meat display refrigerator, by shuffling on the right side and on the left side and hopping, while singing “get some cold cuts, get some cold cuts.” The butcher (played by Frank Gerrish) and other two customers (played by Jenifer Kenyon and Roz Browne) give him curious stares, but this doesn’t stop Ickey “Shuffle” to celebrate the moment.

The commercial ends with the voiceover saying the tagline “15 minutes could save you 15% or more on car insurance.”