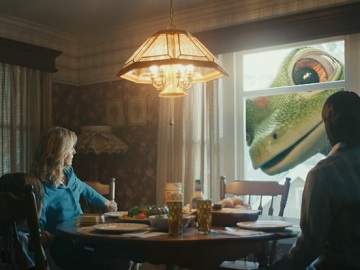 The Gecko gets unsolicited advice from a taxi driver about a giant, money-saving Geckosaurus to star in a new GEICO ad.

The spot features the taxi driver, played by Michael Patrick McGill, telling the Gecko that the commercial could be set on a Friday night, when a family is having dinner. All of a sudden, they all hear “BOOM!” and the kis asks his dad what is the giant creature that walks by their house. The “Geckosaurus” is supposed to make “ROOOAR!” by the Gecko believes it’s a bit too aggressive. At this point, the taxi driver comes up with the idea to have the have the giant gecko stop at the family’s living room window and say “Beg your pardon, but bundling your home and car insurance could save you hundreds”. The animal then starts walking across the neighborhood, leaving its inhabitants in awe.

The commercial, which also features Lilli Birdsell as mom, Brian Shortall as dad, Cary Christopher as the couple’s son, Piper Rubio as a kid riding her bike and waving the Gecko, Luz Mendez as driver neighbor, and Paul Rogan as vacuuming neighbor, ends with the voiceover urging viewers to see how much they could save by bundling with GEICO.