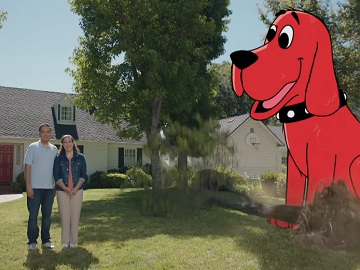 GEICO has released a new ad for its home and car insurance.

The spot features a couple of homeowners who say they love their new home, which boasts a big outdoor space, but their neighbors have a big dog. At this point, the dog is shown and it turns out it’s Clifford, the Big Red Dog. After he brings a tree to the ground, the woman explains he thinks that’s a stick. Clifford is also shown ruining a pool party after splashing everyone around him.

The two life partners then point out that, at least, GEICO makes bundling their home and car insurance easy and helps them save a lot.

At the end of the commercial, the voiceover urges viewers to go to geico.com.

GEICO’s “Bundling Made Easy” campaign features multiple other couples of homeowners talking about the problems they must deal with. Thus, while some of them have noise-related problems, others have fencing problems, others issues due to angry birds issues, Ratt, and more.

Previous: Reddit Find Your People Cosplay Commercial
Next: Sunglass Hut A Pair For Every Version of You Commercial