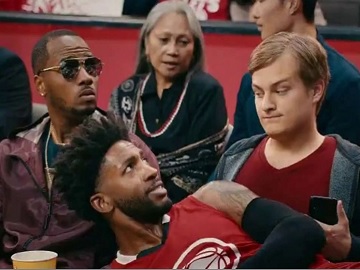 The ad features a basketball player who, after flying into the courtside seats, lands in the laps of all the millionaires who can afford the seats. Among them, however, there is a a guy (played by Matt Patrick Fox), who says he got this superstar moment thanks to Gametime. He bought his seat for $185 on Gametime, which is 60% less than the sum paid by the man in a fancy suit sitting next to him.

The lucky fan also says that Gametime finds the best seats and guarantees the lowest price. The man wearing the suit suggests he could say a great deal fell into his lap, but both the player and the guy think it’s not a good idea.

The commercial ends with the voiceover urging viewers to download Gametime and adding the tagline “Best Seats, Lowest Price.”