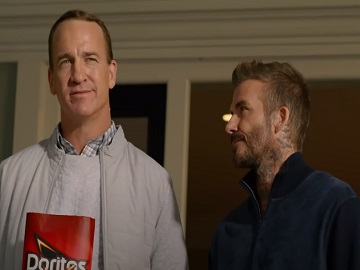 Frito-Lay has released its FIFA World Cup 2022 commercial, raising a question that surely divides people: “Is It Called Soccer or Football?”.

Directed by Michael Bay, the spot features Peyton Manning and David Beckham having an age-old naming debate regarding this sport, while snacking on Frito-Lay products, such as Lay’s and Doritos, which also become a source of contradiction as Manning calls them “chips” and Beckham names them “crisps”. The two stars are shown going to extreme measures like asking their digital followers if the game is soccer or football and even enlisting a small army of “soccer moms” to participate.

The song playing at the end of the spot is Everybody Dance (feat. Nile Rodgers) by Cedric Gervais & Franklin.

The spot is set to air nationally on television and digital channels through the conclusion of the tournament.

Frito-Lay is also launching a “Snack Cards” activation on social media on November 29 that plays off of penalty cards and offers the chance for consumers to win free chips.