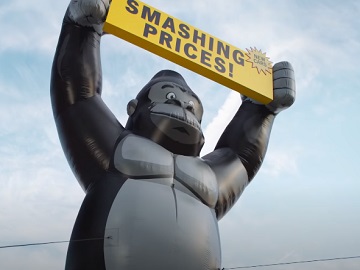 The spot features a man whose car gets hit by a giant gorilla while leaving a dealership. Luckily, he had insurance from Farmers and, with its New Car Replacement policy perk, he had his vehicle replaced with a new one of the same make and model.

“A new car loses about 10% of its value the minute you drive off the lane, or more”, actor J.K. Simmons, the company’s spokesman, says in the 15-second ad, explaining that this is the reason why Farmers’ new Car Replacement pays to replace it with a new one of the same make and model.

“Get a whole lot of something with Farmers Policy Perks,” Simmons adds at the end of the commercial.

The New Car Replacement is available with Farmers branded smart plan automobile policies but not with all of them. It covers the cost to replace an insured’s vehicle with a new one of the same make and model when the insured’s vehicle is a covered total loss within the first two model years of the vehicle and if the vehicle has less than 24,000 miles.

Farmers has been promoting its Policy Perks in the past, too. Other perks include accident forgiveness, Safe Driver Discount, which gives safe drivers a discount simply for having a clean driving record for three years, Auto Multi-Policy Discount, Auto/Home Discount, Guaranteed Replacement Cost, and more.