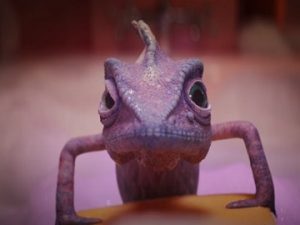 Experian UK has launched a new ad campaign, introducing a new mascot – a credit-savvy chameleon that encourages consumers to “do Experian first before doing credit cards”.

Created by BBH, the spot features a young man in his bathtub ready to sign up for a credit card and being approached by the chameleon, which emerges from the bubbles on a sponge, right in front of him. The unexpected guest explains that he is there to help him and then, jumping on his head, advises him to compare credit cards with Experian before getting a specific credit card because this could get him a way better deal.

The advert ends with the purple creature reminding the guy to brush but dropping his toothbrush into the toilet. The tagline “Before you do Credit Cards. Do Experian first.” also appears on the screen.

The song playing in the opening of the advert is the 2006 single “Hustlin'” by American rapper Rick Ross, which marked his first single. Included on his debut album, “Port of Miami”, the track is available for purchase on Amazon for $1.29.

The new campaign, which runs across TV, radio, and online, aims to highlight the benefits of using Experian as a credit comparison service and show how Experian can help consumers to find credit cards, loans, and mortgages that are right for them, and will also include other two spots focusing on mortgages and loans.