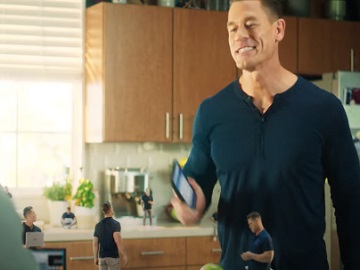 John Cena is back in a new ad for Experian. However, this time he is no longer sharing the screen with the brand’s famous purple cow, but with multiple tiny versions of himself to highlight that Experian makes shopping for car insurance easy.

Titled “Little Helpers”, the 30-second commercial opens with a man who says that shopping for car insurance is the worst. At this point, several small versions of John Cena show up to tell him that this is not true anymore and bring quotes from other car insurance providers. Shortly after, the real John Cena shows up in the man’s kitchen, praises his fellows’ “great work,” and tells the man that Experian is “like having a team comparing your current policy to quotes from top providers”. When the latter check out his phone and reveals that he saved over $900, Cena concludes that Experian helps.

“We compare. You save on car insurance,” the voiceover says at the end of the commercial urging viewers to go to the dedicated section on the Experian website.