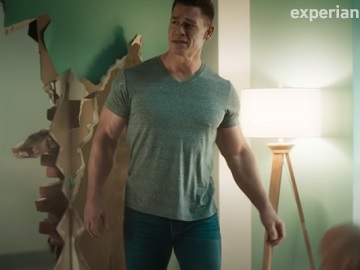 Experian has released a new commercial to announce that now paying rent could boost your credit scores instantly, for free, with Experian Boost.

The spot features John Cena smashing through a wall into a woman’s apartment and telling her it’s a nice place, all while fighting with a guy. His four-legged companion, the purple cow, shows up, as well, pushing the villain through walls and, eventually, through a window, out of the woman’s home. Cena tells the woman that paying rent can raise her credit score instantly, free, with Experian and, at the end of the commercial, the voiceover also informs that “Now rent can boost your credit score instantly, free, with Experian Boost”.

Experian is available for download on the Apple Store and Google Play.

Experian Boost has been promoted in several other ads starring John Cena and his purple cow. In one of them, he shows up on the purple cow at a party to help a young man boost his credit score and get the credit card he wants, in another one he’s leading a stampede of purple cows to save the day for a downtrodden man stranded with his broken down truck in the desert and a sign reading “credit denied”, in another one he sets free a young couple in a lab who are brainwashed to believe that a credit app called Credit-Rama will save them money, and in another ad he jumps from a plane on the cow, using a purple parachute personalized with the Experian logo.