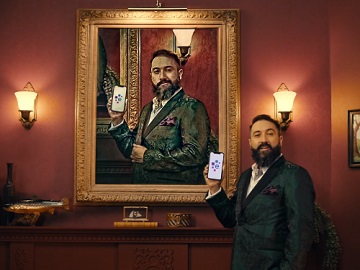 Experian has released a new ad for its Experian Boost feature, which can boost your credit scores instantly, free, and help you thus get new credit cards and lower interest rates.

The spot shows a bearded man in the 1800s saying that Experian has just cracked the code on shopping for car insurance and that it compares your current coverage with over 40 top providers, helping you save over 900$ a year.

The end of the commercial sees the man near a huge painting of himself, which portrays him with a smartphone in his hands and the Experian app on it, saying the tagline “Another way Experian is helping you save”.

“You do the work, you save the money” an onscreen line reads at the end of the video.

Experian Boost has been promoted in several other ads starring John Cena and his purple cow. One of them shows the actor/WWE wrestler and the purple cow on a roller coaster that suddenly stops, leaving many people, including Cena and his “pet”, upside down. When one man asks what they are going to do now, Cena advises him to boost his credit score instantly with Experian. After using Experian Boost, the man says he’s up 13 points and he got approved for a credit card, too.