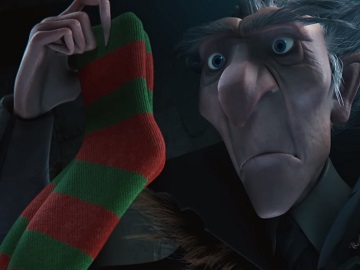 Erste Group has unveiled its highly-anticipated Christmas commercial, highlighting that Christmas is always a celebration of togetherness and love.

The animated ad, from Vienna-based creative agency Jung von Matt DONAU, features a small town left in the dark by a cold-blooded old man, who cuts power boxes and sabotages even the gas tanks of cars. The inhabitants are worried about the fact they don’t have electricity anymore, but they soon find a solution. Dressed in their thickest clothes, they all gather in the town square, around the huge Christmas tree, candles in their hands. An old lady is shown giving some children some thick socks she had crocheted.

The mean-spirited character is visited in his tower by a tiny bird, willing to give him a pair of socks, too, but he grabs them and throws them away, despaired that the people have come together to celebrate Christmas.

The commercial ends with the tagline “#believeinchristmas” appearing on the screen.

“This year’s advert addresses all of us and the many challenges we are facing as a society right now. In times of need, strong communities are the ones in which people help each other out. That’s what we want to show in #believeinchristmas. Coming closer together – that’s what Christmas is really about,” explains Mario Stadler, Head of Group Brand Management & Communications at Erste Group.

#believeinchristmas is the fifth international Christmas advert that Erste Group has created and the success of Erste’s previous Christmas adverts such as “Hedgehog Henry”, “Bumblebee Hanna”, “Composer Edgar” and “Father-to-be Jakub”, which had over 225 million views and 25 awards.