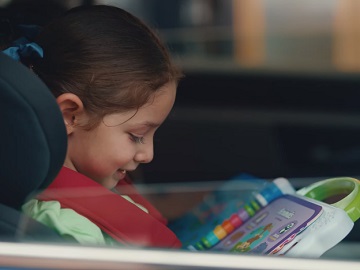 The 30-second spot features a family on a road trip, stopping at a gas station, where the father takes the opportunity to purchase some batteries. While trying to choose between Duracell batteries and Duracell Optimum, he asks himself if this is a time for power or optimum power in his daughter’s favorite toy. He then imagines a scenario in which her favorite toy (LeapFrog Learning Friends 100 Words Book) runs out of batteries and she begins to play with her new favorite toy, his sanity. In his mind, he sees her wreaking havoc in the back seat of the car for 73 more miles, which he decides is unacceptable, so he upgrades to Duracell Optimum without hesitation.

The commercial ends with the voiceover saying the tagline “Power you can trust”, which also flashes across the screen.

Described as the brand’s most groundbreaking innovation yet, Duracell Optimum features enhanced performance driven by a new proprietary cathode system that outperforms even Coppertop. According to Duracell, the Optimum line boasts “extra life” and “extra power,” enabling a flashlight to shine brighter and longer.