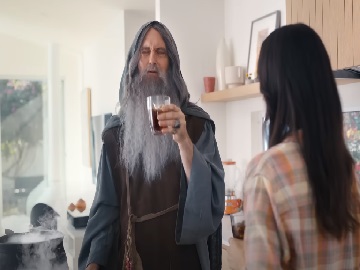 Dunkin promotes its Cold Coffee in a new ad, highlighting that you can make delicious, iced coffee at home with Dunkin’.

“You don’t have to be a wizard to make delicious iced coffee at home,” says the voiceover in the opening of the 15-second spot, which features a woman making a Dunkin’ Cold Coffee. The beverage is taken by a wizard who is in her kitchen and can’t help but exclaim “Wow, that’s good!” after tasting it. It also turns out he can’t help using his wand either to create thunder in the sky. Asked if she wants him to do it again, the woman, quite terrified by the possibility of having a storm taking away her house, politely refuses.

The voiceover introduces Dunkin’ Cold as coffee that stands up to ice.

The brand has been promoting its Dunkin’s at Home products in numerous ads. One of them shows a modern Rapunzel, who tells a prince willing to save her that she doesn’t want to be saved from her castle, all while enjoying a cup of Dunkin’.