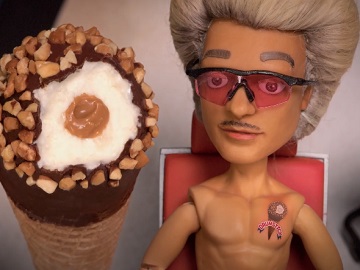 In its new ad campaign, Drumstick has introduced Dr. Umstick, which aims to reintroduce the 94-year-old sundae cone brand to a younger audience.

The main campaign film is five minutes long and features the protagonist, voiced by Brian Delaney, on his search for true love. His friends, Mr. Punky the robot and two latter-day Valley Girls, point out that he loves Drumstick because he’s always going on about its creamy vanilla center, chocolatey nugget, roasted peanuts delicious caramel sauce and crispy sugar cone, and has been for years. He, eventually, concludes that he is indeed in love with Drumstick and decides to marry a Drumstick cone.

Another ad features the Doc getting a tattoo of the “creamy, chocolatey, nutty ice cream,” for which he has a “sandals-over-head” obsession and another one shows him getting his hair blown out into a bouffant to look more like his Drumstick.

Developed by creative agency Opinionated and directed by HouseSpecial directors Kirk Kelley and Alice Mathias, the ads, which aim to reflect the brand’s core values, end with the tagline “Another Day, Another Drumstick”.