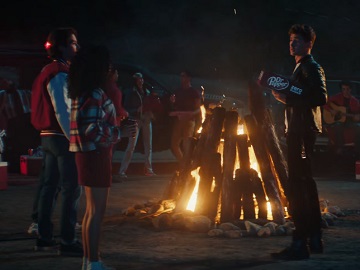 The spot, titled “Zero to Hero”, features the Fansville students celebrating a State shutout when a mysterious, one-of-a-kind newcomer arrives, bringing with him Dr. Pepper Zero Sugar, which he says he stole from his parents. One of the students, named Derek, starts landing on him, asking if he thinks he’s too cool to drink regular Dr. Pepper. However, after he tries it and realizes it has a delicious taste, he completely changes his attitude and admits, in front of everyone, that he was wrong and was projecting his insecurities on his soda. His curly-haired friend stops him from saying more by pointing out that he’s over-sharing.

The video ends with the voiceover saying the tagline “Dr. Pepper – The one fans deserve”.

The fifth season of Fansville, part of the brand’s sponsorship of the College Football Playoff and Presenting Sponsorship of the National Championship Trophy, which goes through 2026, also features Brian Bosworth, who returns as Sheriff, Alabama quarterback Bryce Young, and more.