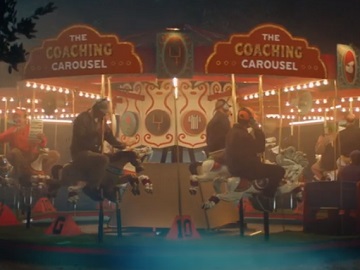 The spot, part of the fifth season of the episodic drama featuring parody storytelling from the fictional college football fanatic town called “Fansville”, sees the Sheriff (played by Brian Bosworth) showing Logan (played by Nick Ballard) and Jay (played by Jay Reeves) the Coaching Carousel, after they apparently told him they want a new coach. This carousel picks a coach for the two fans and, to their surprise, they are “offered” an international circle coach, dressed in a suit, who starts reproving them, in a foreign language, for the way they play football. The new coach tells them that in football you are not supposed to touch the ball with your hands, but when he notices the can of Dr Pepper in the Sheriff’s hands, he immediately changes the subject and grabs the can, ready to enjoy it in the company of the three men.

The episode ends with the voiceover saying the tagline “The one fans deserve” while on the screen two hands are chin-chinning the Dr Pepper Original and Diet varietes.

For this new season of Fansville, Dr Pepper has also teamed up with prolific Alabama Quarterback, 2021 Heisman Trophy winner, Bryce Young. “It’s a natural alignment for the best player in college football to be part of the most beloved annual campaign in college football. On the set of “Fansville” and on the field, Bryce brings his natural A-game,” John Alvarado, SVP of Dr Pepper Brand Marketing, said in a press statement earlier this year, in August.