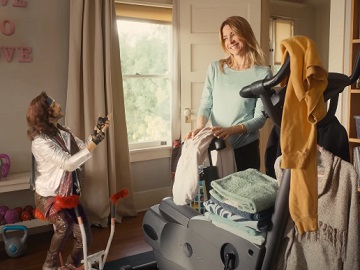 Dr Pepper’s miniature singing mascot is back to the screens in a series of new ads that promote the brand’s soft drink.

One of them features Lil’ Sweet (played by Justin Guarini) on a tiny exercise bike asking a woman if she finally used her exercise bike as a place to hang her sweaters or she put up a positive quote that’s only missing a few letters. At this point, her quote “Live to Love” hung to the wall becomes “Lie to Love” when the “V” letter falls to the floor.

At the end of the commercial, the Dr Pepper range – including Original, Diet and Zero Sugar – is showcased on the screen along with the tagline “The one you deserve”.

In another ad, Lil’ Sweet gets an unexpected invitation from a young woman who’s going to her fifth destination wedding in the last two months. The campaign presents Dr Pepper as a reward for things like using the exercise bike to fold the laundry, picking up the kids from school 20 minutes late, and not hanging well a big screen TV on the wall.

Guarini, who was the American Idol season 1 runner-up, began playing Lil’ Sweet in 2015.