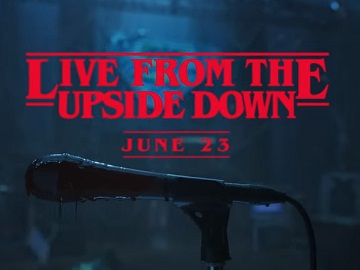 Doritos has teamed up with Netflix to bring Stranger Things fans a concert called “Live From The Upside Down”, which ties back to the sci-fi show’s setting of Hawkins, Indiana, which was supposed to host a gathering called Doritos Music Fest ’86 in-universe.

The spot, part of a campaign that promotes the fourth season of the hit series, opens with the voiceover saying that Doritos Music Fest 86 was the greatest concert that never happened. “The artists scheduled to perform disappeared outside Hawkins, Indiana, and the show was canceled until now,” the narrator also says, listing Corey Hart, Soft Cell, the Go-Go’s, and special guest Charli XCX as the artists set to perform during the show, which is called “Live From the Upside Down” and is set to take place next month, on June 23rd.

“Scan a bag. Open the portal. Enjoy the show,” onscreen lines read at the end of the 30-second commercial.

Among the specially marked bags of chips, there also is a limited-edition Doritos 3D Crunch Three Cheese flavor.

Fans will be able to purchase tickets for the virtual concert event through Frito-Lay’s Snacks.com site, which will sell “Live from the Upside Down” merchandise to give attendees a keepsake from the experience.

The Go-Go’s “We Got the Beat” and “Our Lips are Sealed,” Corey Hart’s “Sunglasses at Night” and “Never Surrender” and Soft Cell’s “Tainted Love” are on the released setlist so far. Modern pop star Charli XCX will be performing a surprise collaboration with one of the artists on the lineup.