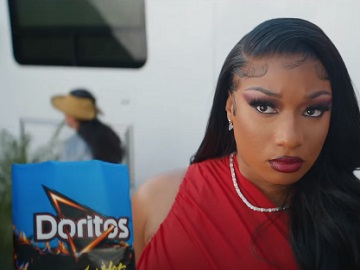 Frito-Lay has enlisted Megan Thee Stallion to star in its Doritos Super Bowl commercial. The brand has recently unveiled a teaser for the Big Game ad and it seems a sloth has overtaken the singer’s designated trailer on a set.

The 15-second video shows the singer walking back to her set trailer and snacking on a bag of Flamin’ Hot Cool Ranch Doritos. When she arrives, she realizes that the trailer door is locked and is surprised to see the hand of a sloth unlocking the door. The trespasser doesn’t let her come in, though. It turns out he has just opened the door to remove the “Megan Thee Stallion” sign off the trailer.

The animal then locks the door in her face, leaving her speechless.

“Unleash your Flamin’ Hot” an onscreen line reads at the end of the video, which informs viewers that the full Super Bowl commercial will be airing on February 13, 2022.

Another teaser released by the brand features Charlie Puth finding his trailer covered in at least four different types of paw prints, each left behind in the classic red Flamin’ Hot dust. He also finds two half-eaten bags of Flamin’ Hot Cool Ranch Doritos and Flamin’ Hot Cheetos, and a single red feather.