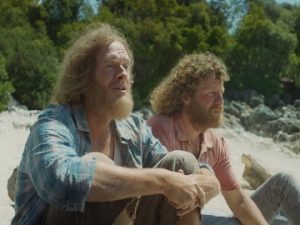 Domino’s UK has released a new advert to promote its latest deal, which consists of “irresistible pizza at an irresistible 50% off”.

Created by VCCP London and part of the chain’s “DOMIN-OH-HOO-HOO” campaign series, the spot features three men stranded on an desert island, longing for pizza. While the first one longs for the iconic Domino’s Pepperoni Passion pizza and the second for delicious melted mozzarella, the third castaway, who appeared in previous campaigns, yodels “DOMIN-OH-HOO-HOO”. Shortly after, a Domino’s Pizza delivery man appears on a jet ski to bring them their “order”.

As the delivery driver makes his way back to his jet ski, the castaways do not think about their chance to leave desert island. One of them, however, shouts “Wait… need a push?” to the man ready to take off with the jet ski.