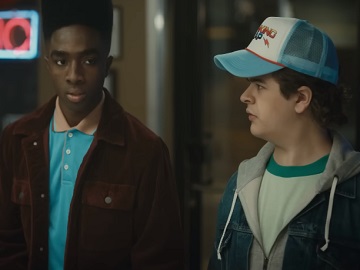 Domino’s Pizza celebrates the July 1 premiere of Season Four, Volume Two of the Netflix hit series Stranger Things with a new commercial, which promotes its Mind Ordering app, described as “an immersive experience which places ‘test subjects’ inside Hawkins National Lab in Hawkins, Indiana – transporting them to the center of ‘Stranger Things’ in 1986”.

“In 1986, scientists at Hawkins National Laboratory discovered that pizza could be ordered with the mind, and now, you can do it too with the new Domino’s Mind Ordering app. Download it today and watch Stranger Things Season 4 on Netflix,” Domino’s said in the description for the ad, which is 3 minutes long and features Dustin and Lucas heading to a Domino’s restaurant to pick up an order. When another ticket for a pizza mysteriously appears after an electricity shortage due to the faulty breaker, Dustin wonders if somebody ordered a pizza with their mind and would like to investigate, but his friend is not willing to do that.

According to Domino’s senior vice president of brand and product innovation, Kate Trumbull, fans considered the video so realistic they asked if it was a deleted scene from the show.

Consumers who try Domino’s new mind ordering app can receive a 20% off coupon to use on their next online menu-priced order.

The pizza restaurant chain is not the only brand that promoted the fourth season of the Netflix hit series. Samsung has also dropped a commercial that marks the upcoming premiere of the show, urging viewers to “Make Stranger Nights Epic”.