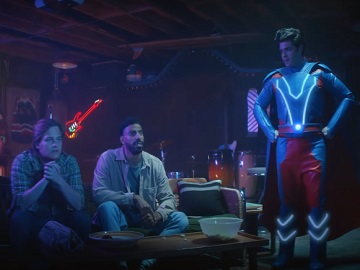 “It takes a Carryout Hero to drop whatever they’re doing and go pick up Domino’s for everyone else. That’s why we’re tipping you $3 for ordering carryout online, to use on next week’s order.” This is the idea behind the latest commercial released by Domino’s Pizza, titled “Carryout Heroes”.

“At Domino’s we’re tipping you $3 for being the hero that gets off the couch and goes to get the pizza,” the voiceover says in the opening of the 15-second ad, which features a young man leaving his friends, while they are watching TV, and going to a Domino’s to get pizza for them. He, as well as the woman featured next, are shown wearing superhero-inspired costumes.

The spot ends with the voiceover urging viewers to get a $3 tip for ordering carryout online at Domino’s.

In order to get this tip, you must first place your carryout order online through Dominos.com or the app. The next step is to claim your $3 tip, and you will be sent an email with a discount promo code that can be redeemed the following week to save $3 on your online carryout order.