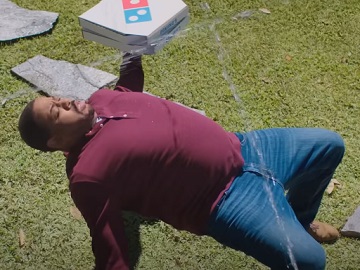 Domino’s highlights that customers get a $3 tip to use on next week’s order when they carry out 3-toppings pizzas for $7.99 each.

“It takes skill to get that pizza from our store to your door. Through tight spots, slow walks, and water shots,” the voiceover says in the opening of the 30-second ad, which features a man who carries out two Domino’s pizzas from a Domino’s to his own house and deals with all kinds of situations on his way, such as having to squeeze into his car, which is between two SUVs parked too close to the doors, waiting for an old woman to cross the street, and dodging sprinklers before entering the house.

The narrator also informs that, next time you order carryout online, Domino’s is going to tip you for delivering your own pizza to yourself. “After all, you earned it,” the voiceover also says, urging viewers to get a $3 tip to use on their next order just for carrying out.