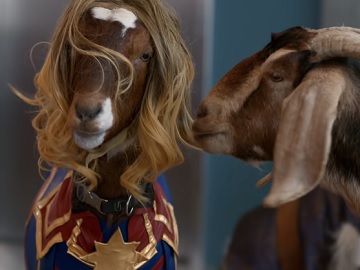 Disney+ has released a hilarious new commercial to highlight that it has the greatest shows and movies of all time.

The spot features Awkwafina saying that Disney+ wanted her to tell the world that it has the greatest shows of all time. She shares the story of how she reacted “Oh, cool, you, guys, have all the GOATS,” and they laughed. As the singer walks through the Disney+ offices, she introduces various goats that she passes by, dressed up as classic Marvel, Disney, Pixar and Star Wars characters, including Lion King the goat, Avengers: Endgame the goat, Star Wars the goat, Free Solo the goat The Simpsons the goat, and some new goats.

Later on, when trying to get an elevator with no success and seeing all those goats around her, she adds “There’s nothing weird about this at all”.

The commercial ends with the voiceover saying that “The greatest movies and shows of all time are only found on Disney+”.