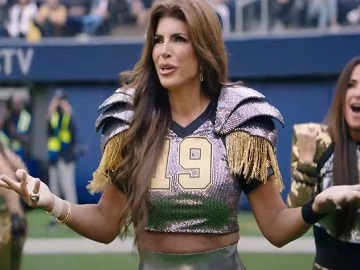 DIRECTV continues its “Get Your TV together” campaign with a new installment. This time, viewers get to see a mashup between a football game and The Real Housewives.

Created by TBWAChiatDay LA and titled “The Wives’ House”, the spot opens with a woman telling her partner that, with DIRECTV, she has football and other content, such as The Real Housewives.

As the video continues, the housewives are shown joining a football game on the stadium and quarterback Dak Prescott of the Dallas Cowboys and wide receiver CeeDee Lamb going head-to-head with Teresa Giudice, Kyle Richards and Kenya Moore. After going up against each other, Prescott can’t help from flipping a table with drinks, which makes Giudice ask “Who flips a table?”.

This ad, which marks the third installment in the DIRECTV “Get Your TV together” campaign, runs across TV.

Previous: State Farm Guy Carrying His Parents on His Back to a Date Commercial
Next: DoorDash Stay In The Game Batteries Commercial