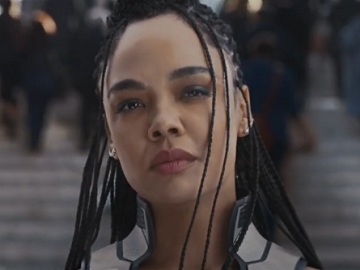 Direct Line, one of the UK’s leading insurers, offering insurance for motor, home, pet, travel, life, cycling, landlord, business and more, has dropped a new ad, this time featuring another super heroe that takes some time off.

The 60-second spot features King Valkyrie showing up to save the day for a shop owner whose window had been broken by some teenagers’ skateboards. However, the lady asks her to take some time off and relax because she has Direct Line and they’ll sort her shop out no probs.

The two youngsters “captured” by the superhero take the opportunity to let her know that Brighton is nice this time of year and Dover is cool, as well.

The next scenes show King Brunnhilde writing a message for her fellow Asgardians and informing them that “the turn of events has allowed” her to take some “me time”. She tells them that there she can “lounge like a local and yet eat like a king”. “The customs of Midgard are rather odd but occasionally amusing enough,” she also says, concluding that it seems she can leave that land in the hands of the insurance lords.

The song playing in the background is the 1988 single “Nothin’ But A Good Time” by glam metal band Poison, from their second studio album, “Open Up and Say…Ahh!”.

King Valkyrie is the latest to join the roster of fictional characters starring in the company’s “We’re On It” series. Other heroes included Optimus Prime, Teenage Mutant Ninja Turtles and Robocop. They all were shown being at a loose end when Direct Line arrived first to the scene of a breakdown.