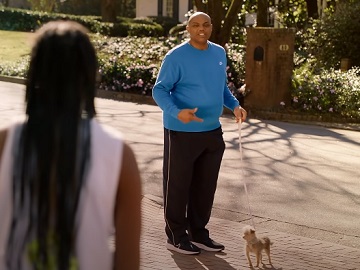 DICK’S Sporting Goods has enlisted Charles Barkley to star in a series of new ads.

One of the spots features a mother helping her teenage daughter to pack all the items she needs for a soccer tournament. They are in the front yard, taking a look in the trunk to check if there are all the things the girl needs, when the mom realizes that one of the cleats is missing. Noticing that Oscar, the family’s dog, is chewing it, she concludes they need to buy some new cleats. At this point, Barkeley shows up, walking his dog, and informs the lady (who recognizes him, not like her daughter, who wants to know who’s the “old guy”) that she can visit dicks.com because they got all the sports and they have curbside pickup.

When the teenager tells Barkeley she likes his dog, the former professional basketball player introduces his pet as Charles Barkey. The tiny dog then starts barking to his owner’s amusement.

The commercial ends with the tagline “Every search starts at Dick’s”.

The campaign starring Charles Barkley, which debuted in April 2021, marks the retailer’s first marketing push for its e-commerce site. Barkley is no stranger to advertising. He has also appeared in ads for several other brands, including Capital One, Nike and T-Mobile.