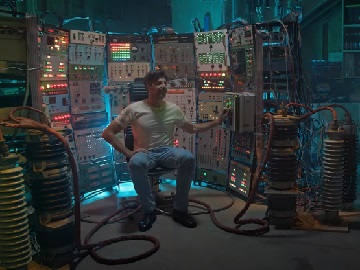 Hot chicken chain Dave’s Hot Chicken has launched its first-ever creative campaign, “Don’t die before you try it”, which is described as “a call to action for those who haven’t yet had the chance to fall in love with the food and the brand” and – obviously – encourages consumers to try Dave’s as soon as possible.

The campaign, created by Party Land, includes two spots – one titled “Sunroof” and another one “Time Machine”. The latter opens with a woman saying the food she holds is Dave’s Hot Chicken. “It’s juicy, hot, and spicy to order. My brother, Ryan, loved hot chicken,” she says, taking a look at a photograph of Ryan that she has on the table, next to her. She also mentions that he would have loved Dave’s if it weren’t for his other love – time travel.

As the commercial continues, it turns out Ryan died electrocuted by his own time machine, which makes the woman burst into tears again, while eating a crispy chicken.

The other spot tells the story of Sam, a hot chicken fan who died while driving with his head out of his car’s sunroof. “Please don’t mess up and die before you eat Dave’s,” Sam’s grieving friend urges the viewer.

On October 24, the chain, which is backed by Drake, Samuel L Jackson, and Maria Shriver, gave out free hot chicken for Drake’s 36th birthday from 9am until 11pm.