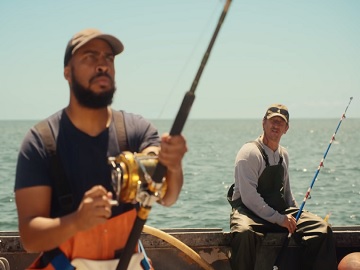 Dave and Buster’s continues its “The Great Indoors” campaign with a new installment.

The spot features two men on a boat, fishing, with one of them telling his friend that Dave and Buster’s has 10 new games and showing both his hands to emphasize the number of games available now for customers. At some point, he puts his hand in the water and a shark bites his hand, leaving him without 3 fingers. “That works out,” the man says, explaining that David & Buster’s also has seven new foods (with 7 fingers left, he can show how many new foods the chain has).

“Summer is better in the great indoors at Dave & Buster’s,” the voiceover says at the end of the 15-second ad, before the brand’s jingle, “Ding Ding Ding”, is heard.