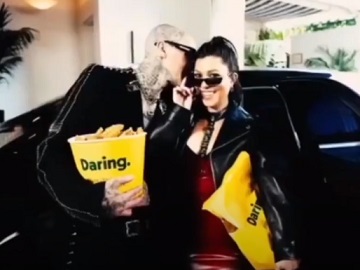 Kourtney Kardashian and Travis Barker have partnered with vegan chicken company Daring for a new campaign.

The spot features the couple, who had their third wedding in Italy almost a month ago, in a series of intimate scenes, in which they are eating Daring’s breaded plant chicken.

One of the shots sees the Poosh mogul and Blink-182 drummer in the back of a limo, both wearing their signature black sunglasses, with Kourtney taking a bite out of the vegan chicken, while holding in her lap of a “Daring” bucket of chicken.

Another scene features Barker feeding his partner, clad in a red lingerie, long strands of spaghetti pesto. In front of their fridge, filled with Daring products, in the bathtub, and in bed – these are some of the other places in which they are sharing a piece of Daring chicken.

The soundtrack music is the 2020 single “Ringing in My Head (Instrumental Version)” by Coma Svensson.

Barker said in a press release that he hasn’t eated meat since he was 13 years old and really good plant protein is important to him. “Daring is awesome, because it’s super clean and has all-natural ingredients,” said the drummer, who also mentioned that he’s “excited to see more plant-based choices on menus”.

Kourtney, on her side, said in a release that she has been on health and wellness journey for the past 13 years, which has made her “super conscious” of what she and her children eat. She admited she’s not fully vegan and mentioned that Travis has helped her “keep to a mostly plant-based diet, which is so much easier with Daring.”