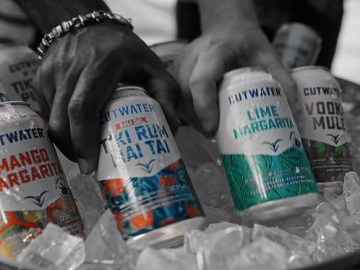 Cutwater celebrates the everyday ingenuity of those who work smarter, not harder, in its latest commercial.

Titled “Here’s to the Lazy Ones,” the 60-second ad redefines lazy as ingenious by featuring a diverse cast of people who find innovative solutions to everyday chores, such as chopping meat, washing the car, removing the snow, and more. Thus, a woman is shown using her muscle therapy device to get the meat ready while enjoying a Cutwater Rum Mojito, a man is shown melting the snow while his neighbors are using shovels, and another one is using his vacuum robot to have his Cutwater drink delivered to his hammock. Other people are shown turning to unexpected actions to make less effort and achieve the same result. One woman, for instance, grabs an icicle to put it in her drink instead of walking to the ice cube bags.

“Here’s to the lazy ones. The renegades, the outliers, the unsung, the ones who live life differently, working smarter, not harder, you can make fun of them or ignore them, but the one thing you can’t do is disagree with them.

Because they reach better results with less effort. They push the human race in new ways, and while some may see them as the lazy ones, we see pioneers. Because the ones who make the most of their time are the ones who are ahead of it,” the voiceover says throughout the 60-second ad.

At the end of the commercial the Cutwater Spirits range, including Tiki Rum Mai, Lime Margarita and Vodka Mule, is showcased on the screen, while the voiceover says the tagline “Bar-quality cocktails in a can”.