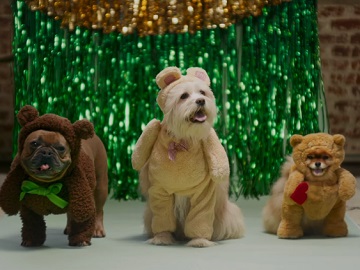 Cricket Wireless has released a series of new ads to promote its Free Phone Mega Sale, which gives consumers the chance to get free Samsung, Motorola and other smartphones when they switch.

One of the spots features Miles, the green triangle, arriving home and finding his friends filming some teddy puppies with their new smartphones, which they got for free from Cricket Wireless. His fellow mascot explains that they are making content, which motivates Miles to wish to do the same. He grabs a phone to capture the cute dog dressed as a teddy bear, but the pet starts licking the phone’s camera. Miles can’t help asking his new “buddy” to go easy on the megapixels.

The commercial ends with the voiceovers introducing the carrier’s Free Phone Mega Sale and saying the tagline “Smile, you’re on Cricket”.

Over the last years, Cricket Wireless has been promoting its deals in numerous ads featuring the cuddly characters. One of them features green mascot Miles having a video call with Brian Posehn and sharing impressions about their beards and getting motivated to work out after a video call with Bárbara de Regil.

Besides Miles and Rose, there are also Dusty, the round-shaped yellow one, Ramon, the round-shaped one with brown hair, and Chip, the square-shaped blue one. They were all brought together for the carrier’s 2018 holiday commercial, created by Argonaut, San Francisco, which highlighted that “The best holiday plans are the ones that bring us together”.